A Brief History of School of the Woods (Established 1962)

When School of the Woods opened its doors in 1962, the Montessori method of education had been in use throughout the world for half a century. School of the Woods, the oldest continuously operating Montessori school in the Houston area, provides an educational program proven and strengthened through more than four decades of successful experience. 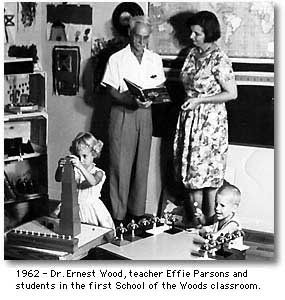 Some people understandably think the school was named for the sylvan setting of its campus. Its name, however, honors Ernest and Hilda Wood, who inspired and guided its founding along Montessori principles. Dr. Wood, a Sanskrit and Asian scholar, introduced the Montessori philosophy to the study group who were considering establishing a new nursery school. When the school opened, he was president of the first board of trustees. School of the Woods’s first home was a classroom on then Unitarian Fellowship campus at the present school location on Wirt Road.

By its second year School of the Woods had begun to move to a strongly Montessori oriented program. That movement continued with staff attendance at the 1963 Montessori national convention, staff in service and workshop training and the hiring in 1965 of its first teacher certified in the Montessori method.

By 1969 enrollment had grown to 132, and by 1970, almost the entire staff was educated either in the Montessori method or a specialty area. That same year, School of the Woods inaugurated its first elementary class, 75 five to seven year olds and a team of teachers specialized in six different learning areas. In 1973, the School formalized its permanent commitment to the Montessori Method by initiating affiliation with the American Montessori Society, which continues today.

In 1975, the school started acquiring its permanent home with the purchase of the property immediately south of the Unitarian Fellowship campus. The current 5 acre campus on Wirt road is the result of that acquisition program.

A full-day program for children 21/2 to 6 years old began in 1976; and enrollment kept growing, to 219 by 1977. During 1980, an eventful year, a new building was completed for pre-primary children and upper elementary as well as the addition of a fourth-grade level class.

In 1981, a fifth grade was added and, in 1982, the sixth grade. Seventh and eighth grade classes began in 1984 providing School of the Woods programs from early childhood through middle school (7th and 8th grades).

During the years between 1985 and 1995, four permanent buildings were constructed for the elementary, upper elementary and middle school programs. In 1999, the Performing Arts Multi Purpose facility was remodeled. During the 1998-99 school year enrollment grew to 330.

During the 2001-2002 school years, the School completed the required self-studies and on site visits to become accredited by the Texas Alliance of Accredited Schools (TAAPS), and the Southern Association of Colleges and Schools (SACS).

In July 2002, five acres of property on Westview, near the main campus, was purchased for the permanent home of the high school. The Twenty-First Century Capital Campaign was launched in April 2003, to raise funds to build the next phase of the master plan for the Wirt Road campus and begin the architectural and construction plans for the high school.

In September 2005, two additional permanent buildings were constructed on the Wirt Road campus; the third elementary building and one for the upper elementary level. In August 2007 five classes moved into new or remodeled spaces. The Development Office was relocated to the Wirt Road campus. During the 2010-2011 school year, enrollment grew to 375.

In November 2012, the high school site on Westview was exchanged for five acres on Bobbitt Lane across the street from the main campus on Wirt Road. This site is now the permanent location for the new high school facility and all-school gymnasium completed in February 2019.